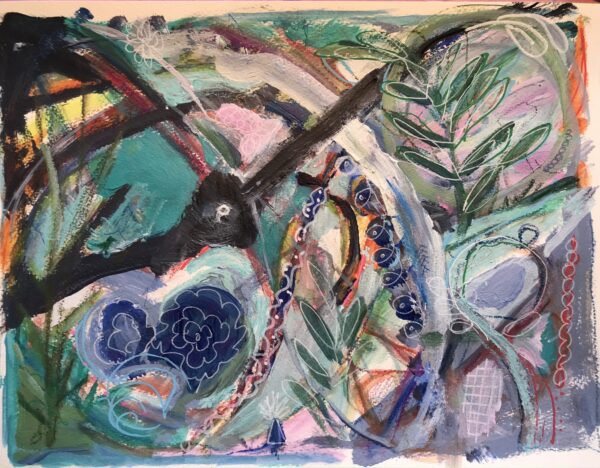 It’s easier to recognise the moment you have done enough when you are making representational art, but that sense of finality is sometimes more elusive in abstract works.
These are more often than not descriptions of feelings or inspirations, and so they are intensely personal. The feeling of completion is thus something internal or instinctive, and is sometimes really almost overwhelming.
The pleasure which comes from looking at the work and being able to say ‘That’s it!’ is equivalent to seeing some natural scene, or meeting with a dear friend.
This painting was made almost unconsciously – I had no preplanned idea of what it would be. I added various elements – some strong, some delicate, and built up the layers of the work. Some earlier layers of the painting can be seen through the later layers. The colours are light and joyous. There is a hint of landscape, but only just. There is foliage, and movement, and reference to circles – the eternal changes of the daylight and the seasons. It has pattern, but also simplicity. At one moment, I looked at it, and knew it was finished.
I recently completed work on a concertina sketchbook, or zigzag book, with 16 double spreads which can be opened up in a continuous line, each image separate and complete, but also taking part in a linear progression of images, and this was so satisfactory and pleasing to do – and received so much public acclaim – I will make some more.
In the meanwhile I have been playing with some new ideas which are now in my gallery on this site. They have no theme as such, apart from a fairly limited palette: in this case a dialogue between reds and sea-blues, and incorporating circles or foliage or both.
All these works are for sale. If you would like find out more about how to adorn your walls with an original painting, please just get in touch and ask. I would be so pleased to talk with you about all this, especially as we cannot at the moment arrange gallery exhibitions. Buying art is always an exciting thing to do!

Cancer, Chemo and Me – Exhibition